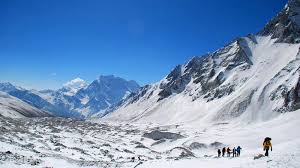 The best possible circuit trek of Nepal is Manaslu Trek. The trail surrounds the highest peak of the region. Manaslu stands as the eighth highest mountain of the world. The Gorkha district of Manaslu conservation gives you the ideal opportunity to enjoy the pristine view of the mountain, the typical Tibetan culture, and also the village tourism. The tour had been opened in the year 1991. The trek is geographically fascinating and culturally spectacular.

The trek starts from Arughat. Its course follows a narrow trail along the bank of the river Budhi Gandaki till Lapubesi. You will pass through the local village of Gurung, terraced fields of potato, tobacco, corn, and millet, and then you will reach Topani. Over here you will be able to take a natural hot water shower. During your trek you will come across Chorten, Stupa, and many other monasteries during the trek.

The Best Time for Trekking

The most appropriate time to trek is from the month of March to May or from the month of September to November. This is because from June to August, the rain drowns almost the entire region. Also, the frigid winter of Himalaya makes the visit to the mountain miserable in the early months of the year. This is also the reason that most of the annual visitors go for pilgrimage in the month of October.

Permits Required for the Trek

When you go for a trek in Manaslu, you would require the Manaslu and Annapurna Conservation entry permit, the specialized Manaslu permit and also the site entry permit for the world heritages.

Safety Considerations for the Trek

All trekkers should maintain their safety while trekking around Manaslu. As a matter of fact, trekking agencies of that area also maintain some safety measures. Here are some of the particulars of the Manaslu trek:

There are other trekking region which are also popular and beautiful Himalayan views.

Tour Operator and Travel Expert for Nepal, Tibet, Bhutan and India. View all posts by tourinfonepal